What a fantastic time we had at out Beach Party Leavers Disco. Thank you to everyone who helped set up, clear away and serve us our lovely food! 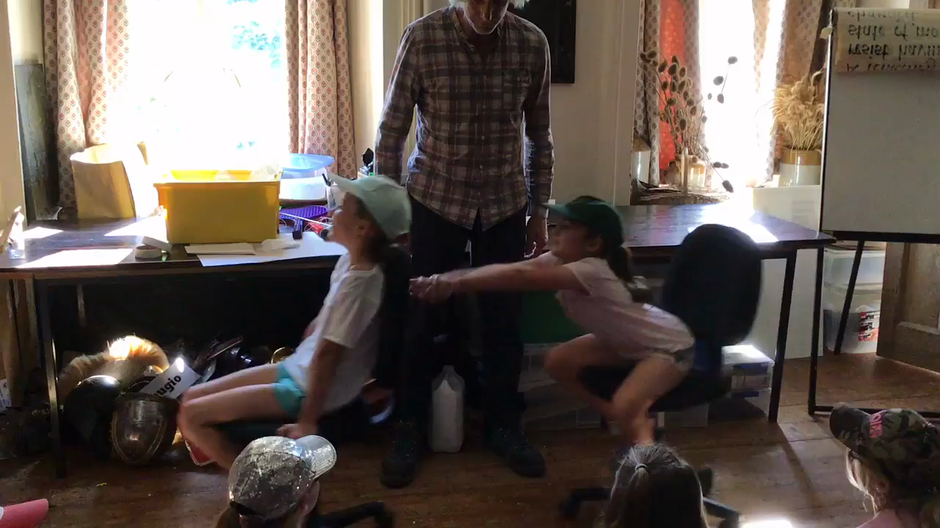 Didn’t quite go to plan second time around😲 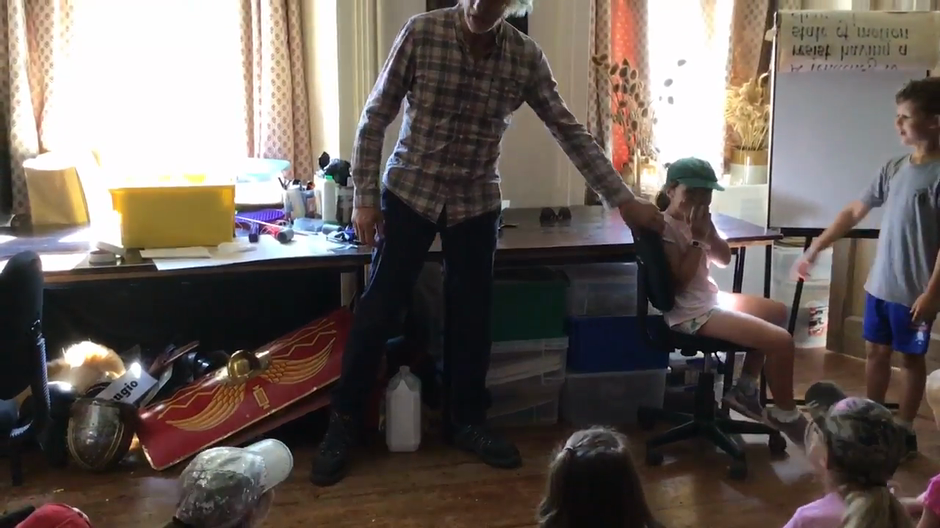 Our final activity at Hooke Court today. We are making rockets,  it first we had to learn about gravity, forces and inertia. (Newton’s Laws! ) 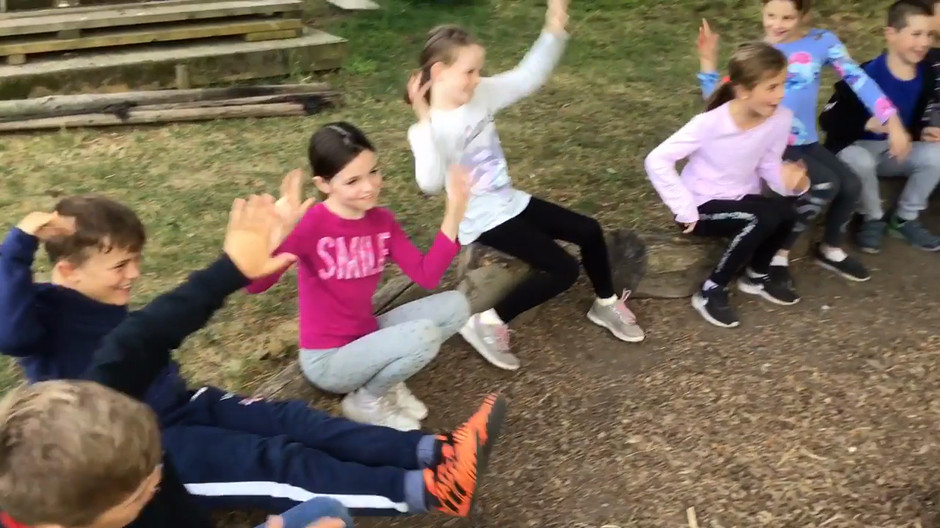 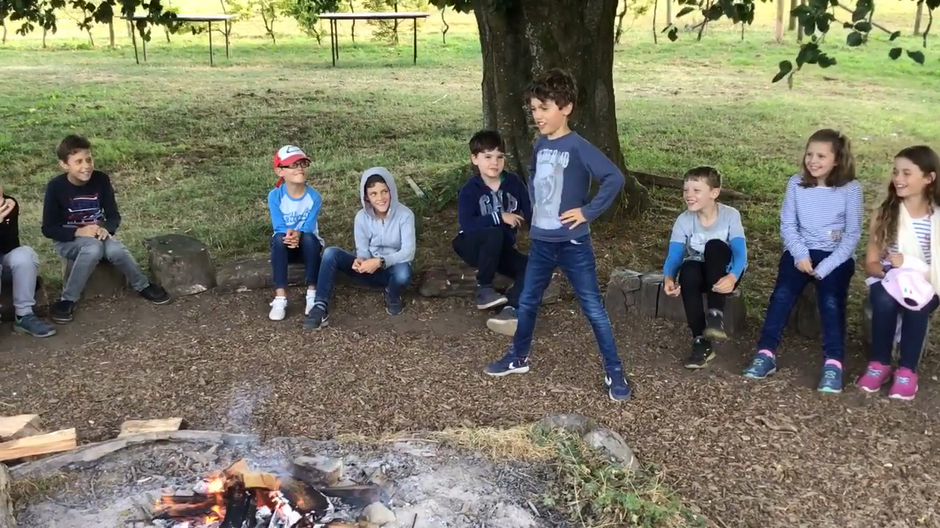 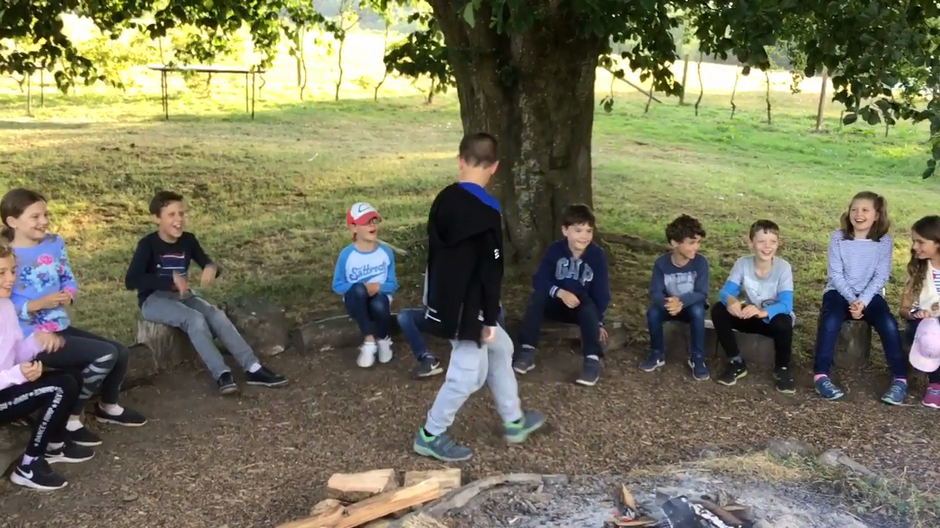 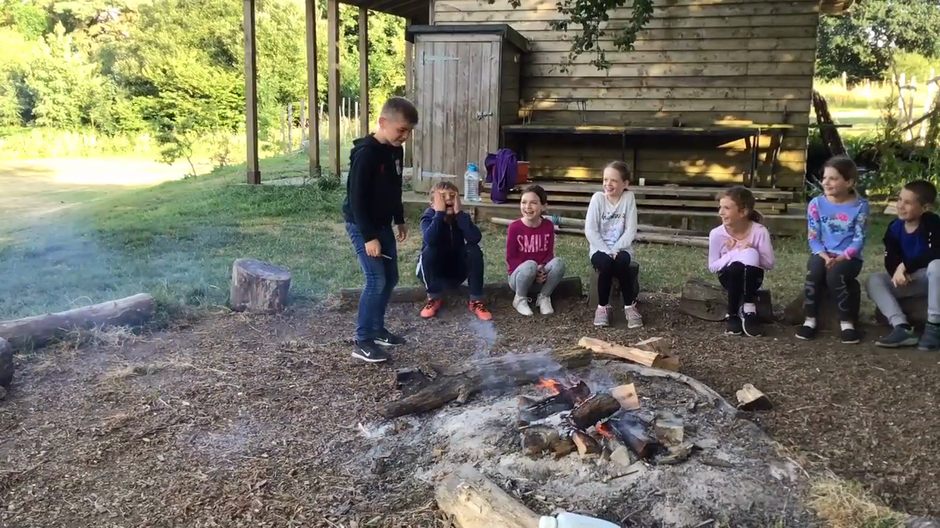 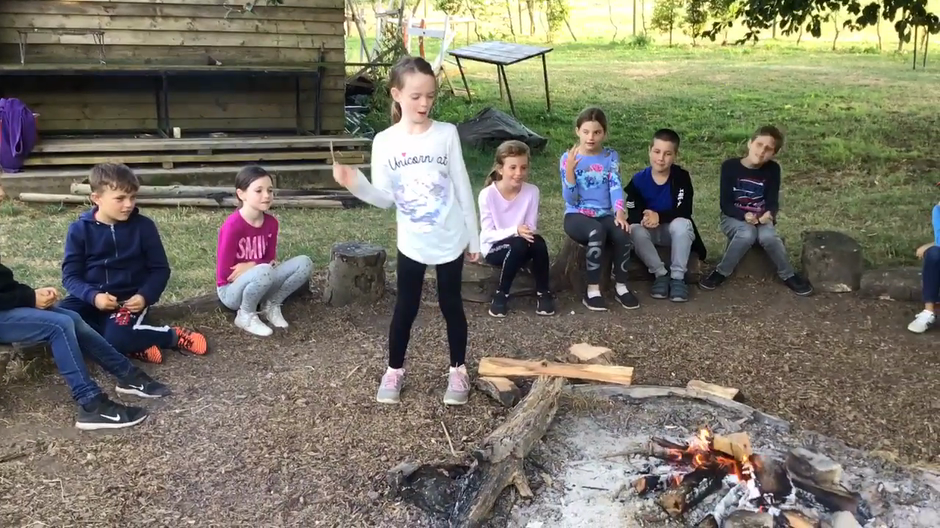 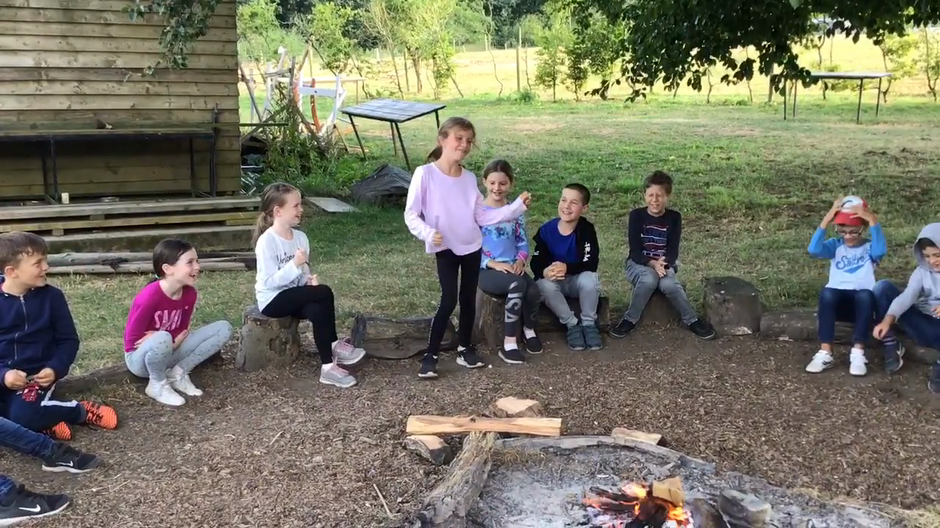 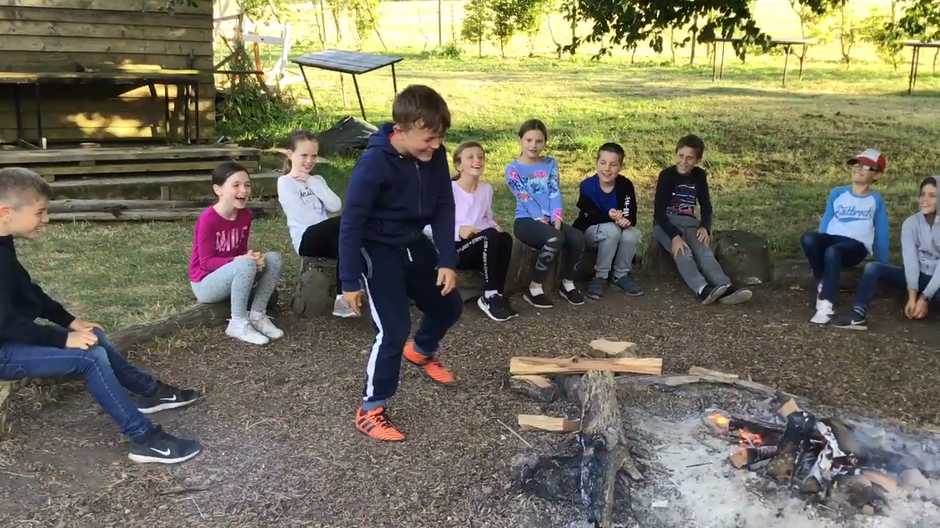 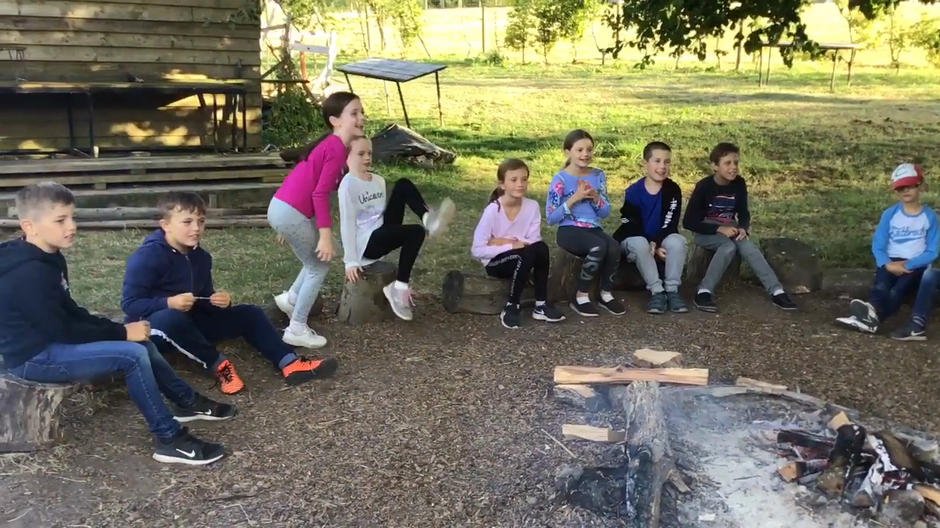 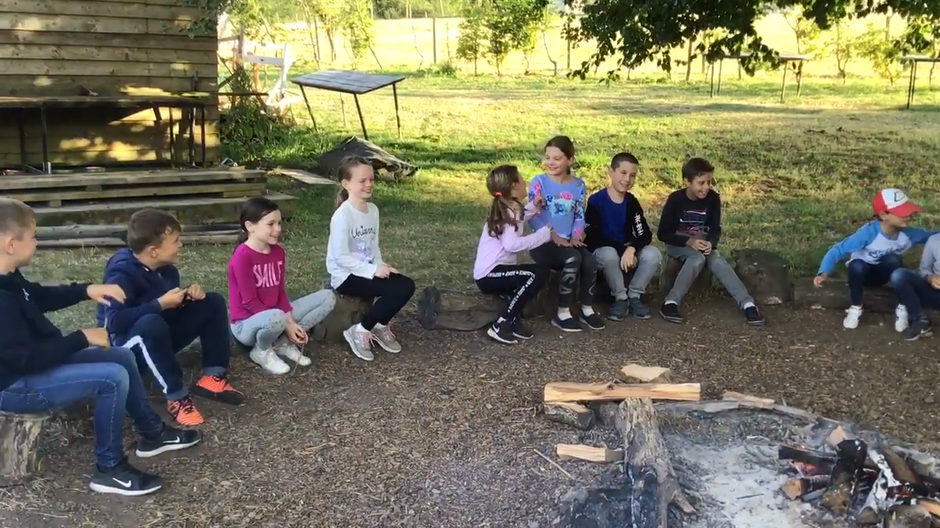 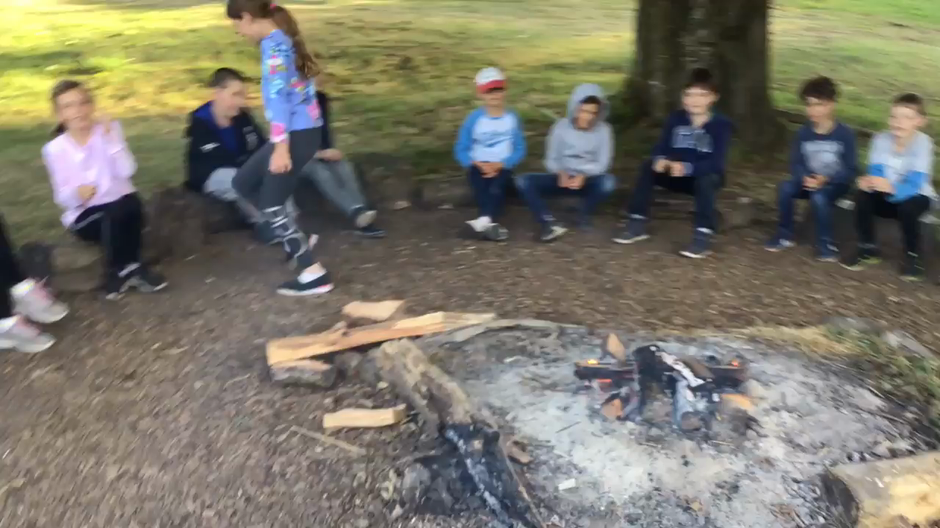 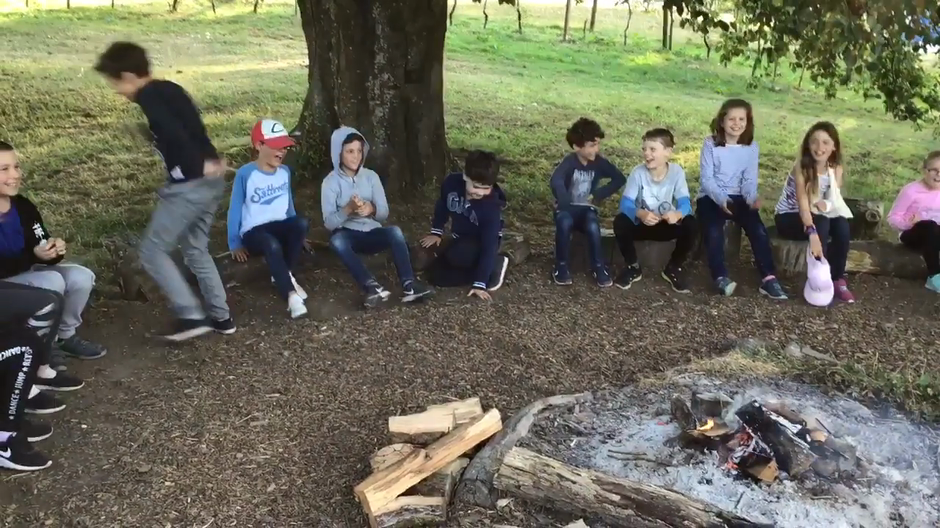 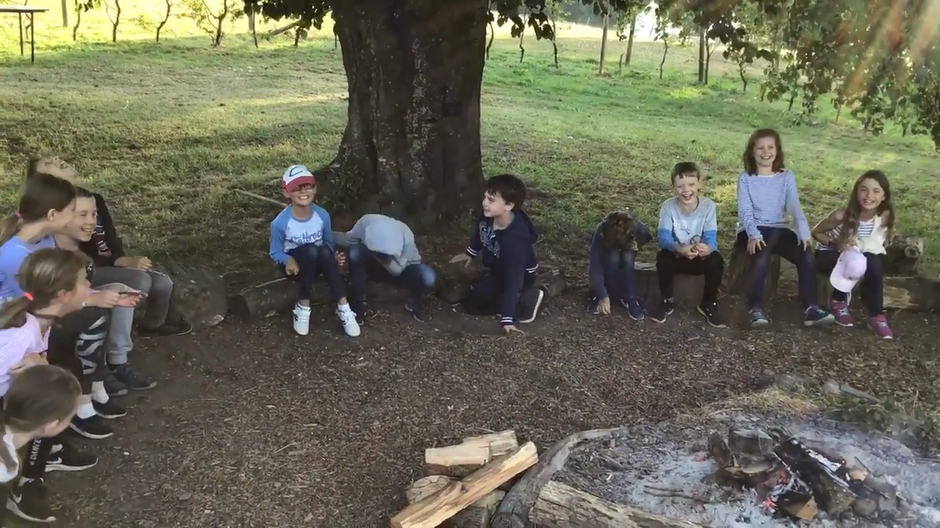 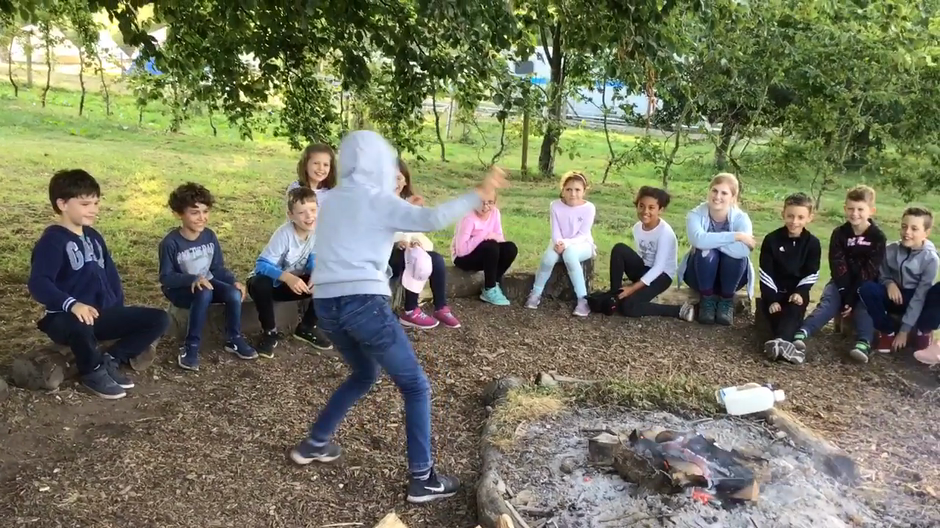 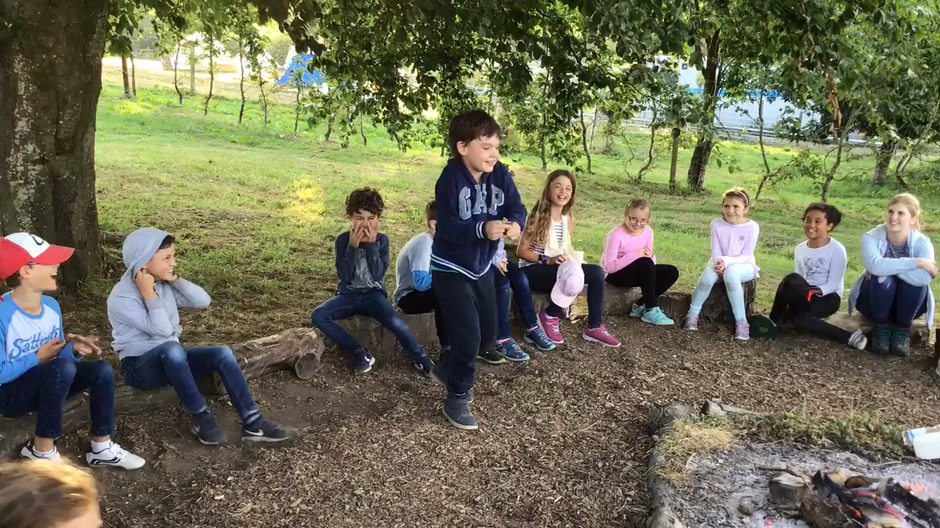 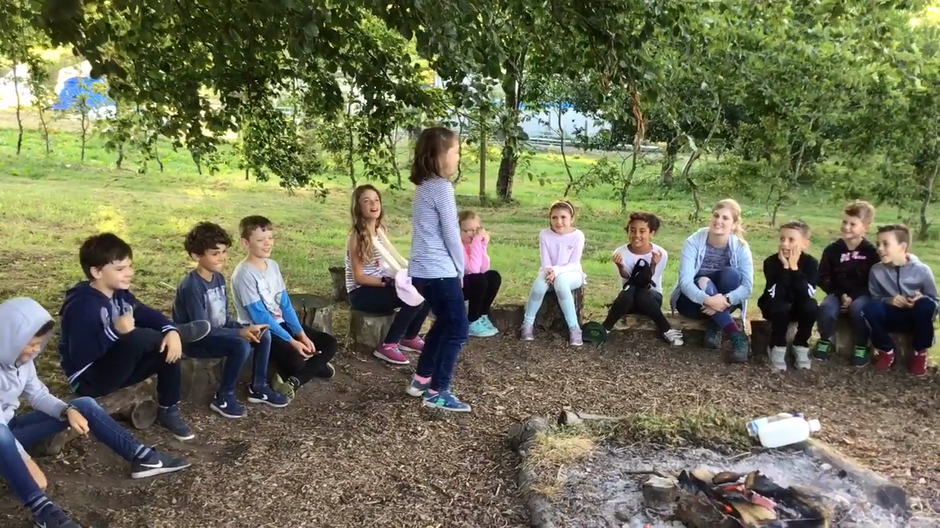 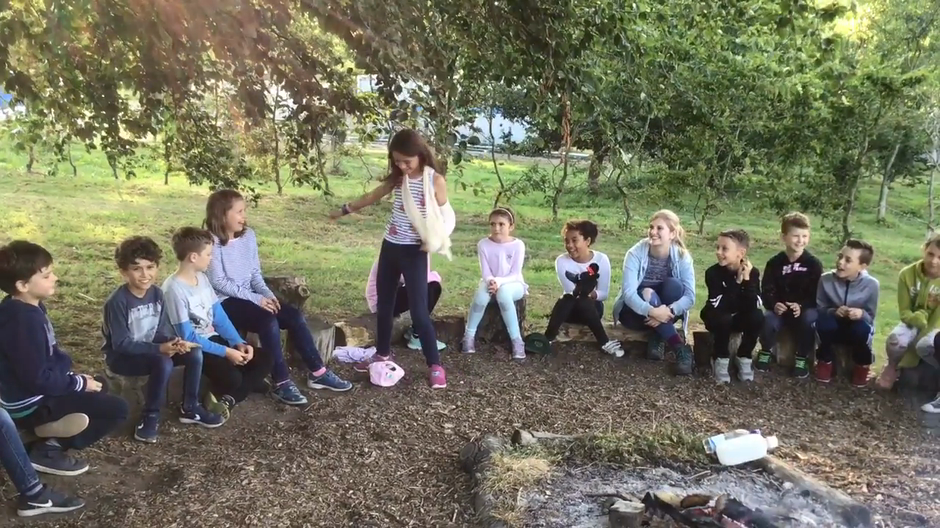 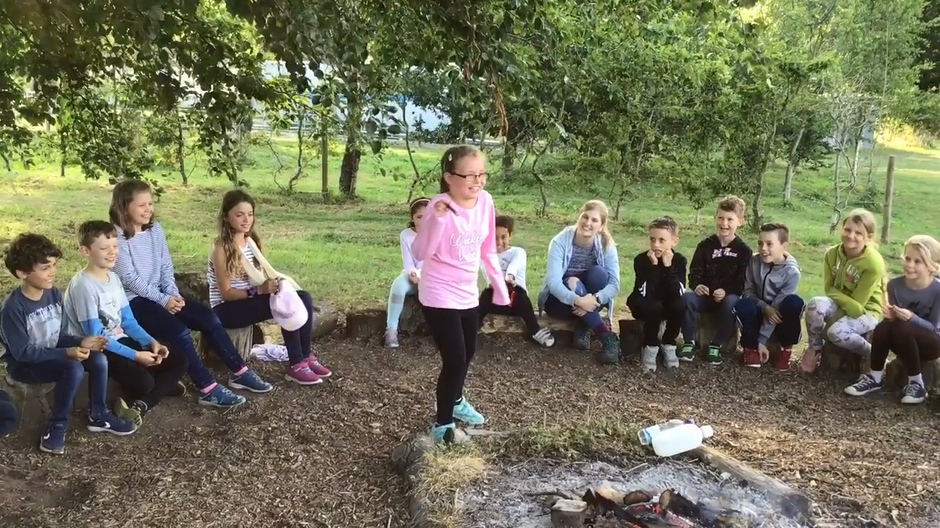 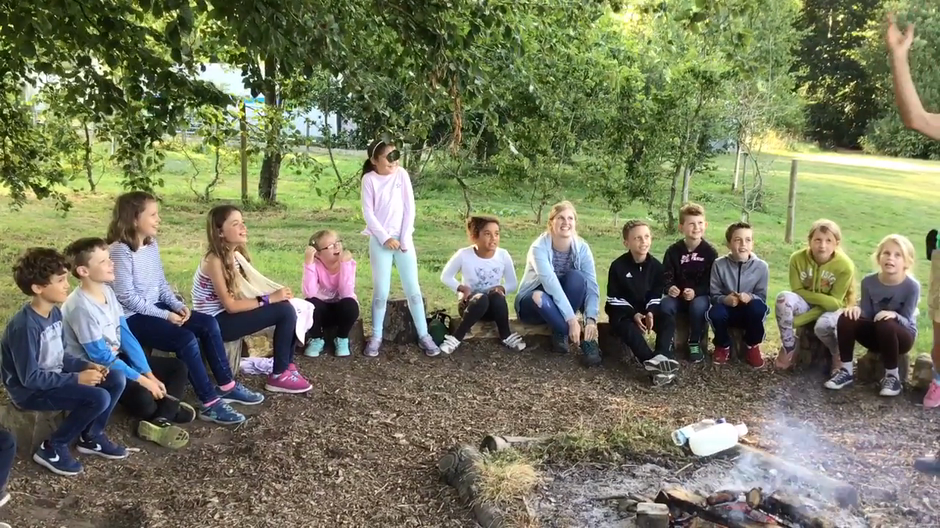 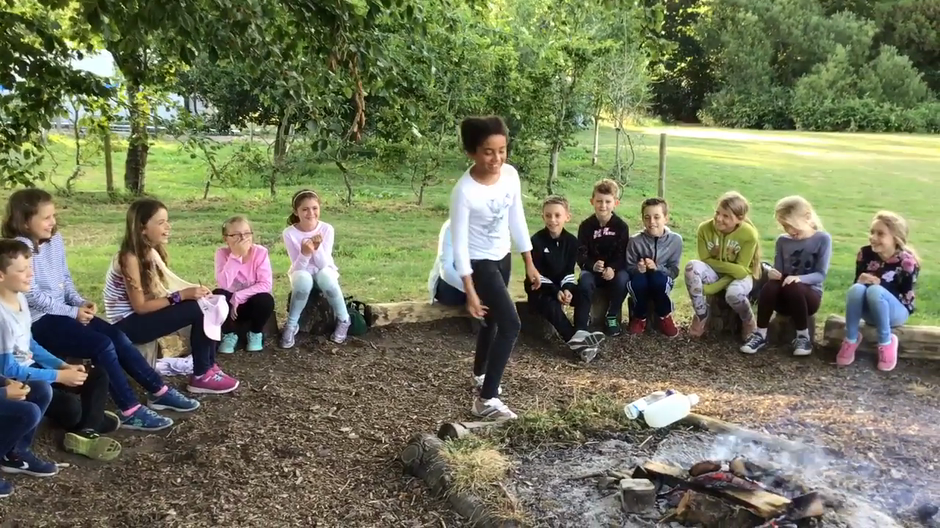 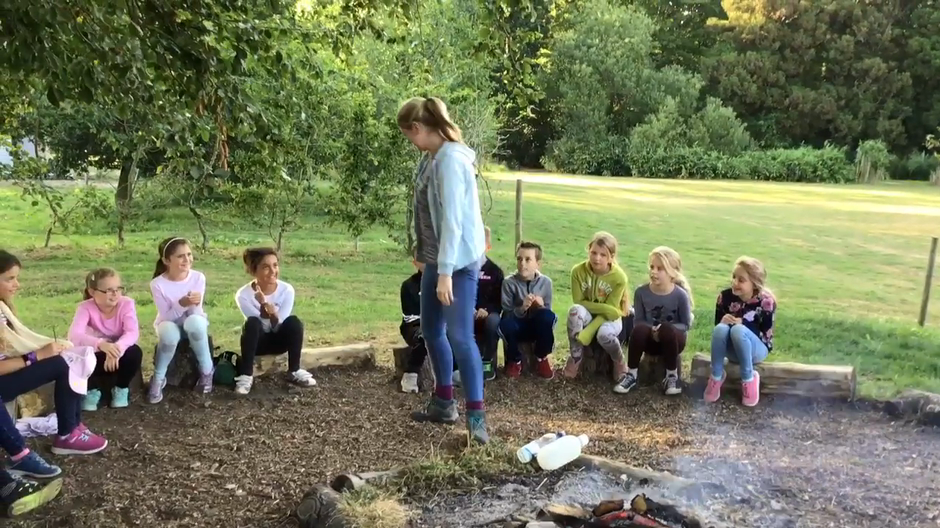 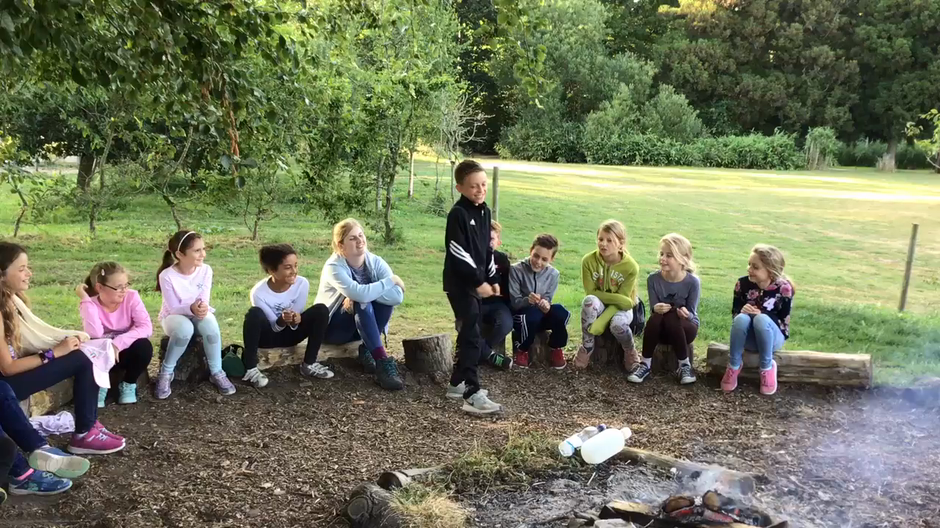 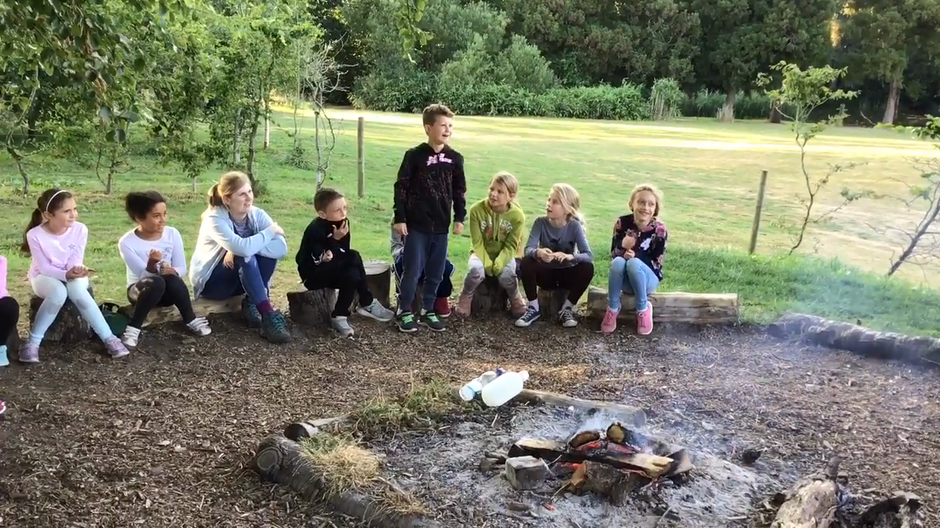 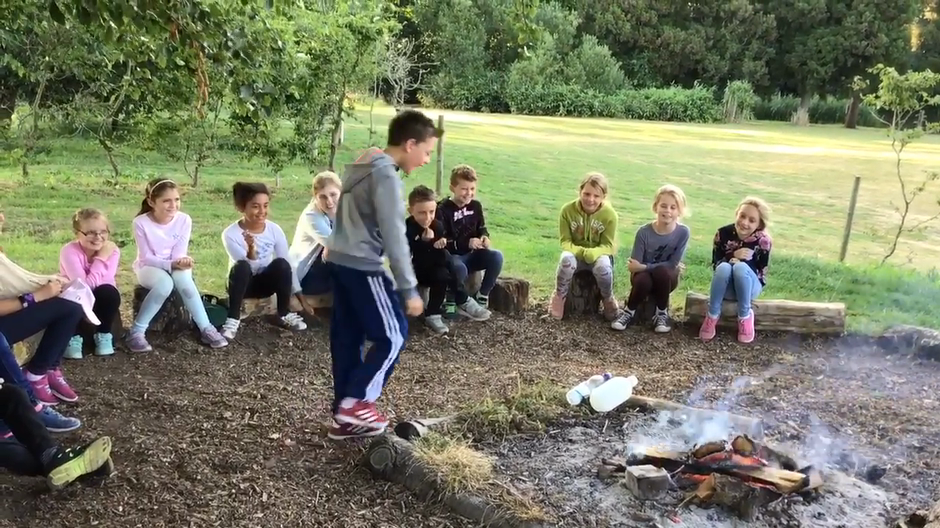 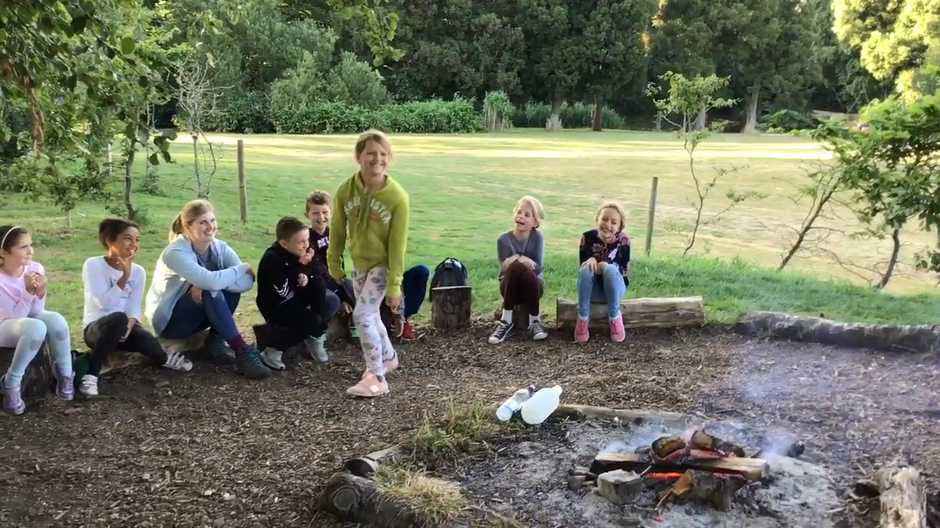 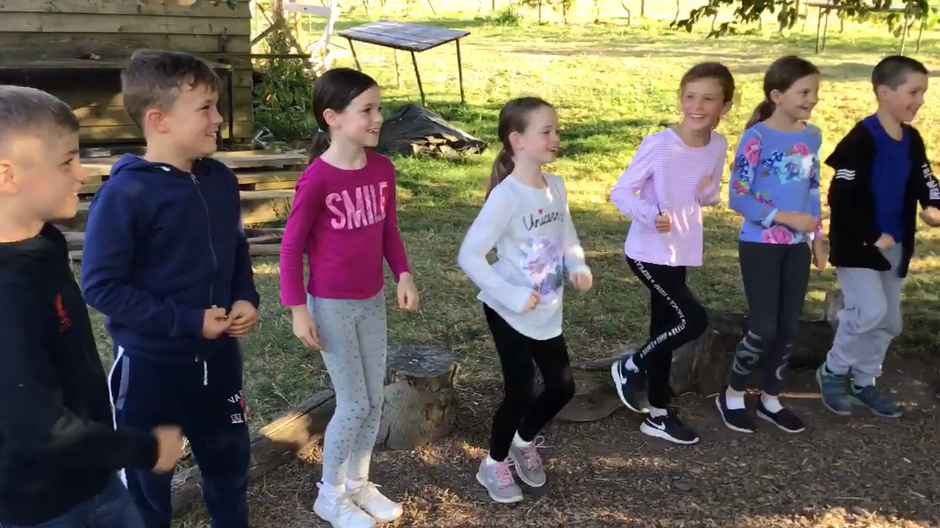 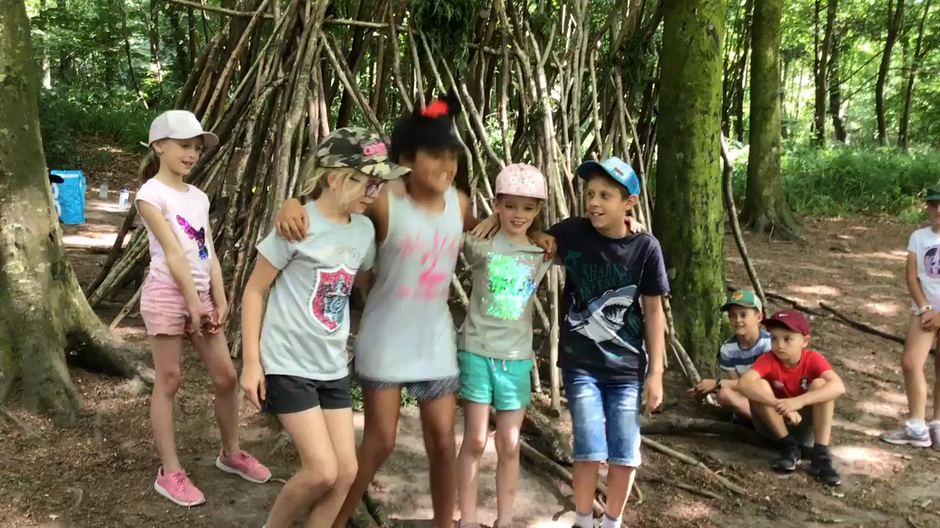 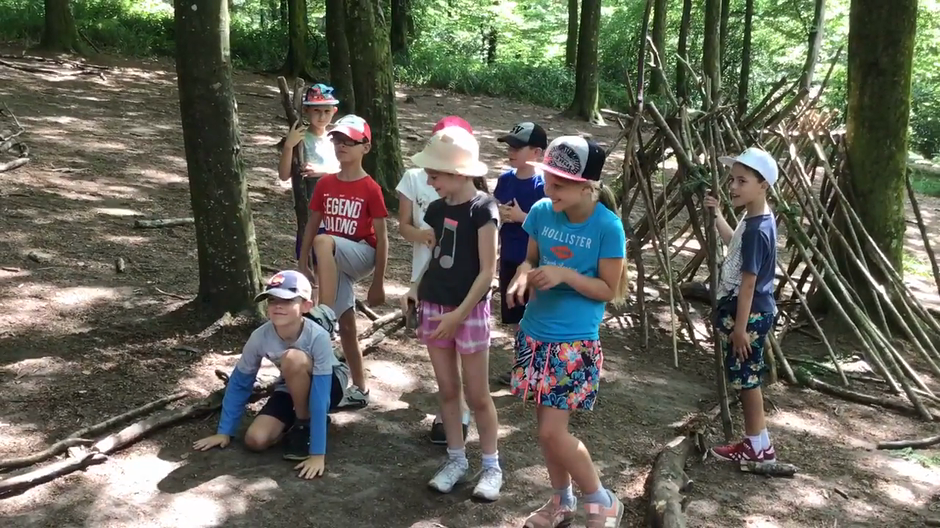 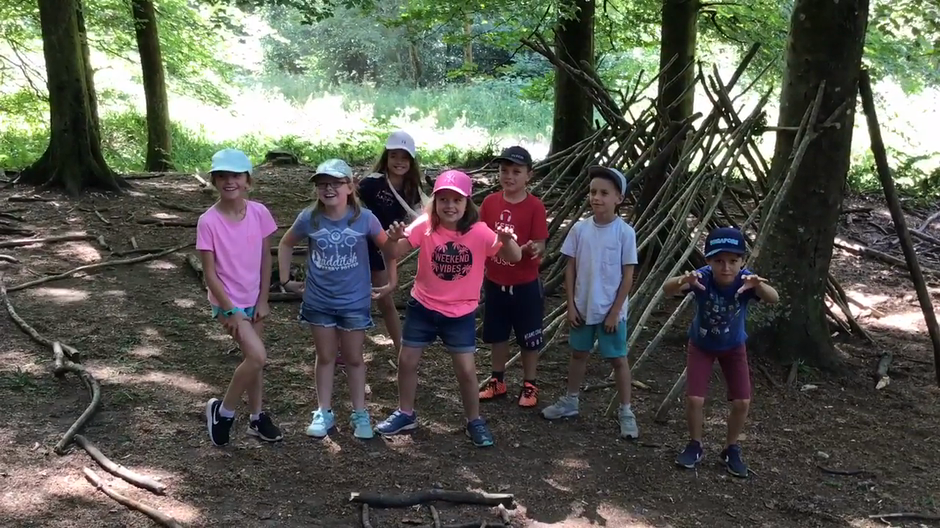 Today has been action packed. We had to bridge the moat this morning. We had make a stand and we had to learn how to tie really tight knots. We got there in the end.

This afternoon we have been shelter building and had to work as a team to make sure they stood up.

We finished today with songs round the camp fire. ( We even managed to see the end of the football while having our hot chocolate.)

Looking forward to seeing you tomorrow and telling you all about it.

We have had a fantastic day. Good night, sleep tight!
Team building after tea. It took us a while to get there but we managed it !
A little football before tea.
We have had a walk up to the forest. It was very hot but we had our water bottles with us and we were covered in sun cream! It was lovely and shaded in the forest and we stopped for a drink and a biscuit. On the way back we saw some 16 week old pigs.

We we have arrived safely.

The children visited Verwood Library today to help launch this year's Summer Reading Challenge! The children listened to a presentation by the illustrator Jane Chapman who told them how she creates images for different books and then showed the children how they can speedily draw a range of different animals! Next, the children were given paper and pencils and followed her instructions for how to draw, amongst other things, monkeys, chameleons, sharks and frogs. What a great afternoon!

Welcome back to another half term in Owls!

Today the children started experimenting with the Scratch Jr app. They spent time designing their own Sprite and used different controls to move it around a scene. Some children were even able to repeat the instructions, make their Sprite bigger and smaller and also add their own faces in to the scene! In the coming weeks they will create their own algorithms (a set of instructions) for their Sprite to follow.

This week the children have been learning how to make classification keys to sort different types of animals. They started by learning the definition of 'mammal', 'amphibian', 'insect', 'bird' and 'reptile' and grouped animals into each category. They then had a selection of animal cards and thought of example questions to distinguish each one. They then worked as a group outside to create some large scale classification keys.

Owls have been investigating how represent different types of data this week. Thursday was a very exciting lesson as the children used a data logger to find out how quickly hot water cooled down. The recorded their measurements carefully every two minutes, making a table of their results, and then showed the data on a time line graph. The children were so keen they even had lunch in the classroom so they could carry on collecting the data!

Today, Rachel from Sustrans came in Owls and she brought something very special in with her... a pedal powered electricity generator! The children had great fun using their legs to power a range of electrical items. including two lightbulbs, a CD player, a set of fairy lights and even a bubble machine! How exhausting!

Well done to our tag rugby teams who played brilliantly in the tournament today!

Wishing you all a very happy Easter break. See you all on Monday 16th April.

Today Owls performed various tunes on their clarinets for their families and the other children at school. They did amazingly!

Lots of 'Crazy Creators' arrived in Owls today to participate in a range of activities! First, the children introduced themselves to the school in Worship time and then thought about their most famous inventions. They drew a picture of their creation and wrote a couple of paragraphs explaining what it is.

Then, they worked together to create some towers. It sounds easy, but three of the four members of the group were blindfolded! They had to listen to the instructions of their team leader to succeed. The tallest tower was an impressive 20cm!

In the afternoon, Owls were presented with a range of materials and were tasked with trying to make a lightbulb light up. They worked brilliantly together and persevered so well. By the end of the afternoon, each group had made a circuit...and could even add in buzzers or switches!

What a brilliant day!

Today, two teams of footballers went to Hillside First School to compete in the Year 4 Football tournament. Each team played four matches and persevered brilliantly, even through wind and rain, to do their best for their team. There were some spectacular goals scored which really got the crowd going! Well done teams, we are all very proud of you!

What an amazing day at the Oceanarium! The children had a great time looking at all of the underwater animals and learning which coasts they came from. The weather was perfect and so they also fitted in a walk along the pier to look at the coastline and a beach stroll as well.

In science this week, the children were investigating different types of rock. They looked at a range of samples, sketched them and then wrote words to describe them. If you have any interesting rock samples at home please bring them in to school!

This week the children have been learning about fraction and decimal equivalents. They used Numicon plates to cover a certain amount of the baseboard and then wrote this as a fraction and then as a decimal, for example 2/10 = 0.2.

Later in the week, they used Base 10 equipment to construct models and pictures, making sure that each one added up to a certain total, such as 3.24. Can you spot any that look a bit like Mr Webster?!

The children in Owls have successfully completed three amazing performances of 'A Christmas Journey'! We were all so impressed with their amazing singing, dancing and acting. Well done Owls!

On Thursday, the children's parents and carers came in to school to look at lots of fabulous learning about Ancient Egypt! The adults were treated to a song, tried out some hieroglyphics, read some brilliant writing and also looked at some canopic jars that the class had made. What a lovely afternoon! Well done Owls!

The children have had a wonderful afternoon enjoying their 'wheels' marble treat! They loved playing on their scooters, bikes and skateboards and set up slalom courses to complete. A great reward for lots of learning this half term!

Owls have begun their new topic 'Treasure in the Tomb of Tutankhamun!'. The topic got off to a very exciting start when the children had a best dressed mummy competition!

Well done to these children who are our Owls netball champions!

Today, Mr Webster took four children to Ferndown Upper School to undergo Sport Bronze Ambassador training. The children took part in four different workshops during the day and learnt how to engage other children in playing games during lunchtimes at school. They tried out some new team games, learnt how to change rules to games they already know and also invented some new games themselves. They also worked alongside children from other First schools to explain the games they had invented. The children did amazingly and were so enthusiastic!

Owls have been exploring symmetry this week. They used the Numicon baseboards and shapes to create different symmetrical patterns across vertical, horizontal and diagonal lines.

There has been lots of amazing maths going on in Owls this week. The children have been learning about different types of triangles and quadrilaterals and thinking about their properties when trying to sort them into different groups. At the start of the week, the children were challenged to make as many different triangles and quadrilaterals as they could using a range of materials, for example art straws, lolly sticks and geoboards with elastic bands. See below to look at how they got on.

In PSHE, Owls read three different poems about friendship and what it's like to feel left out. The children picked a poem and, as a group, made a freezeframe which they felt represented the poem. Mr Webster was very impressed by their thoughtful responses to the poems and their fantastic facial expressions!

Owls had a lovely, sunny start to the week as they got outside to improve their netball skills with Mr Sainsbury. The children learnt how successfully pass the ball, using both bounce passes and chest passes, and were also able to use pivots to help them get in the right positions when playing.

This week the children researched new playground games that they could teach the younger children. They came up with some great ideas and tested them out on each other.

It has been brilliant to see the children arrive to school so happily each morning this week and I have been very impressed with their enthusiasm and how keen they have been to start learning!

This week, the children have been writing about their favourite day from the summer holiday and took time to edit and improve their pieces before writing their best draft for a display. In maths they have been improving their column addition and subtraction skills.

Also this week, Owls began their Playground Buddy training. Maybe they could think about a game that they could teach the younger children in the playground?

Have a lovely weekend and don't forget the Owls parent meeting on Wednesday 13th September at 2.30pm. I look forward to seeing you then.