Squirrels have been going minibeast mad! The week got off to a very exciting start when the children found that the butterflies had hatched from their cocoons over the weekend. They were amazed at seeing them fly around and drink juice from the apple pieces in their habitat. On Monday afternoon everyone went outside and saw them released into the school grounds.

The children also spent time going around our outside areas searching for minibeasts. They drew and labelled the ones that they found.

On Tuesday, the class did some research about their favourite minibeasts and they discovered that the class favourite was spiders! On Thursday, the children thought about how different minibeasts would move and made music to go with their ideas. What a busy week!

Squirrels have enjoyed not one but two class visits this week! On Tuesday afternoon the children walked up to St Michael's Church where Carol showed them around and talked about some of the most important things in the building.

On Wednesday the class went to Blashford Lakes. The children loved all of the pond dipping, river dipping and meadow sweeping. It was very interesting using microscopes and collection pots to observe the animals they found.

Look at the amazing fancy dress outfits that we wore for our Marble Treat!

What a very exciting week we've had in Squirrels! On Monday, Mrs Baker, who is a vet, came to talk to the children about her job. She told the class about what she does to look after animals and gave everyone some good tips for looking after their pets. On Thursday, Mrs Macdonald came in with her tortoise, Jasper. The children were amazed as he moved around the tray he was in and got very excited when they could touch him! As if that wasn't enough, on Friday all of the children watched a mountain bike stunt show on the playground as a reward for coming second in the area during the Big Pedal event. Phew! Time for a rest!

This week, Squirrels began some learning about Noah's Ark! The children have listened to the story and re-ordered events which have been mixed up, set up their brand new roleplay area and written about their favourite parts of the story. They have also enjoyed watching and singing along to 'The animals went in two by two".

Animals Went In Two By Two

When we came to school after the Easter holidays we discovered that the trees in our garden had beautiful cherry blossom all over them! We went outside, drew a quick picture of the tree and then used crayons, felt tips, highlighters and pencils to put the blossom on. Look at our lovely pictures - we were very proud of them!

Look at our fantastic Easter bonnets! Well done to the children who came first, second and third in our class. Happy Easter everyone, have a lovely holiday!

This week Squirrels have been exploring the BeeBots. They started off by seeing if they could make them move and then progressed on to trying to make them move to specific places on BeeBot mat. The children were able to input a particular number of movements forward and then press go. Look at the concentration on their faces!

This week Squirrels have been going pancake mad! The children had great fun on Monday making and eating pancakes and then on Tuesday were very excited to take part in the annual Trinity Pancake Race! All of the children participated brilliantly and our class winner was very proud!

RUN, RUN AS FAST AS YOU CAN! YOU CAN'T CATCH ME I'M THE GINGERBREAD MAN! Squirrels have had a very busy week learning about the adventures of the Gingerbread Man. In the pictures below you can see how the children played number games on the computer, counting and ordering his buttons, made some gingerbread men and also investigated why the Gingerbread Man could not swim across the river! Thank you again to the parent helpers who came in this week to give the children a hand with the cooking!

Kung hei fat choi! Today Squirrels have been learning about Chinese New Year. The children have made some Chinese dragons, created red and gold paper chains, learnt the animals associated with New Year and painted a picture of one of them. They also sung songs, read stories and practiced saying a greeting! Phew! What a busy day! Please watch the children wish everyone a happy new year below. 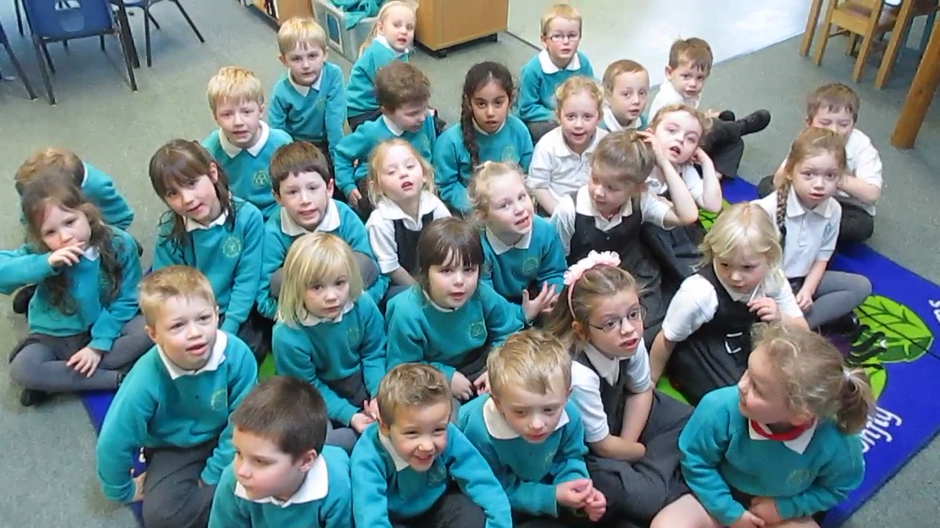 This week Squirrels have been busy improving their number skills. On Friday the children went out in to the playground and were asked to jump around! They had to count how many times they jumped and then write the correct numeral on the ground with chalk.

Also this week, Mr Webster and Squirrels have been very excited to try out the new Activ  Panel which has been installed in the classroom. The children all had a chance to write on the board with their fingers and then watch a couple of videos on there as part of their Marble Treat on Friday afternoon.

Squirrels have been busy thinking about the story of the Three Little Pigs this week! The children have had chances to play in the roleplay area (the pig's cottage!), build houses out of different materials, measure themselves with bricks and test out their 'huffing and puffing' skills by doing some art with straws and watered down paint. Have a look at the pictures below to see some of the things they've been up to.

Squirrels have had a wonderful party day today! The children enthusiastically came to school in their outfits and keenly played a range of games, including musical bumps and musical statues. Part way through the morning we welcomed a special visitor - Father Christmas! He gave the class a range of gifts which the children were excited to play with. ​

Have a lovely holiday and I am looking forward to seeing the children in January!

Squirrels have been busy thinking about people this week...and started off thinking about themselves! The children brought in photos of when they were babies and talked about how much they have changed. The class thought about hair colour, eye colour, teeth, size and also the things that they can do now but could not do when they were younger. See below to see how much our Squirrels have changed! ​

​This week Squirrels have been exploring our new maths resource - Numicon! The children were challenged to put the plates in order (from 1 to 10) and to see if they could cover a whole baseplate leaving no gaps! They also started matching the Numicon plates to numerals. See below to look at the children in action!

Over half term it would be appreciated if you could follow up on a few things that the children have learnt over the past few weeks. Some ideas are:

For guidance of the letter sounds and formation, please refer to the sheet that was supplied at the parent meeting earlier this month.

Have a lovely half term and I'm looking forward to seeing the Squirrels on Tuesday 1st November.

This week the children have been learning about Autumn. They went on a lovely walk around the school grounds looking for the signs of Autumn and noticed lots of leaves that had fallen to the ground! Back in class, the children wrote about some of the things they saw and spent time doing some lovely leaf rubbing pictures. Have a look below at pictures of our walk.

​Today, Squirrels had their first PE lesson! The children got changed into their kits brilliantly and were so excited to go into the hall for their lesson. The children have recently been reading 'Kipper's Toybox' and have found out about some of the toys that Kipper has: Hippopotamus, Mr Snake, Sock Thing, Rabbit, Big Owl and Slipper. During the lesson, the children loved moving around the hall pretending to be Kipper's toys. Have a look at the pictures below and see if you can work out which toys the children are moving like.

Look at us in our PE kits for the first time!

​The children have been busy learning new sounds during our Read, Write, Inc time each day. They now know 11 different sounds and are starting to learn how to blend them together to read words. I am so impressed with their brilliant attitude and enthusiasm for their learning.

In the afternoons the children have a little relaxation in the form of 'Pillow Time'. This is an opportunity to lie down, close their eyes and relax whilst listening to some peaceful music.

​The children in Squirrels have had an amazing start to their time at Trinity! They have been listening to stories, exploring the school surroundings, singing songs, painting and enjoying playing with the various equipment in the classroom. The role play area and bikes have been particularly popular! Have a look at the pictures below to see the children in action.